Stocks are at a turning point, and it could be Apple and other technology names that help decide whether the market revisits October lows. 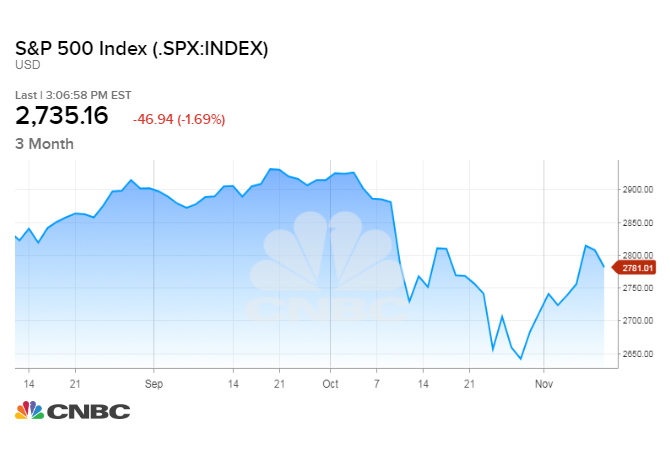 “If the market is going to show commitment to the recent rally, then 2,700 holds, and if 2,700 doesn’t hold, everyone and their mother is going to be talking about a retest of 2,603, and one thing to watch is Apple. If Apple goes past $190, and goes into the $180s, you’re talking about a retest of the lows,” said Scott Redler, partner with T3Live.com.

The S&P 500 also fell back below its 200-day moving average of 2762, a signal to some strategists the longer term trend could really be changing.

Strategist said investors have not shown enough fear, and there’s been no true capitulation in the sell off. “Excluding today, the bounce from the 29th to Friday, this 8 percent move was not accompanied by resounding internals. That left us a little uncomfortable,” said Todd Sohn, technical analyst at Strategas Research. “I think there’s a debate here, a possibility [the lows] are in play.” But he said the market could also retest the February low of 2,530.

“The other thing is when you look at risk appetite, it hasn’t been there. Staples, utiltites and REITs are leading,” he said.

Trump to meet with White…

Theres something behind this market…

Democrat Kyrsten Sinema is the…

Theres something behind this market…

Democrat Kyrsten Sinema is the…